We Don’t Need to Stop Discussing “The Quadrants”

Every so often, in the midst of a discussion about operant learning,  someone will write,

The quadrants* don’t matter. Talking about the quadrants just confuses people and makes them pay more attention to theory than what is going on in front of them. To be truly humane we need to pay attention to the individual dogs and how they react to each teaching method.

I really wonder about that.

Of course the dog is the arbiter of what is pleasant and what is aversive and to what degree. But how good are most people at reading dogs, really? How many pictures and videos can you find on the Internet in 30 seconds that look roughly like the one below? 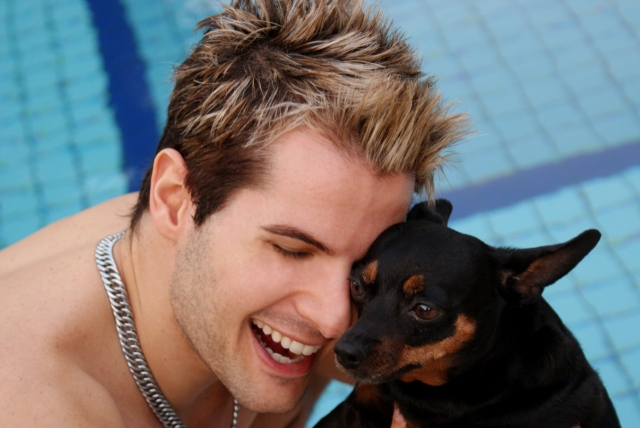 [If you are new to the blog or new to the concepts or nomenclature of operant learning, you may just want to skip down to the movie. It is an example of what I will be discussing here: using theory to inform our practice. It is particularly geared towards folks to whom the theory is new. Or if you really want to go for it, here is a whole post, including a video, that gives examples of all the processes of operant learning.]

Setting up “the quadrants” and observation of the dog as exclusive from one another is a false dichotomy. That is a rhetorical fallacy that implies that there are only two choices when there are actually more, or implies that two choices are mutually exclusive. It doesn’t have to be either or, folks, and I will put forth that that attitude can be harmful.

Learning theory and dog body language observation inform each other. Why encourage people to depend on just one and not the other? Why leave a gap in people’s understanding about the processes of learning, certain ones of which have been shown repeatedly in research and real life to have undesirable side effects?

I know that many pet owners who have hired trainers look at them like they have two heads if they start speaking about learning theory. I get that. Clients often just want a method to solve the problem. But when someone is eager to learn and serious about working with their dog, I think it’s a disservice not to share the nuts and bolts of how animals and humans learn. And it’s a disservice to discourage Internet discussions about the processes of learning. Yes, I know they can be tiresome. But just like with any other aspect of humane training, there are always people new to the subject who can benefit.

The more I see people objecting to “the quadrants”, the more I notice that most of them are attempting to veil their use of less humane techniques.

Here are the two main reasons I think teaching people about the processes of operant learning is important:

There was a video making semi-viral rounds on the clicker training community recently, often accompanied by comments like, “The power of positive reinforcement!” The video has an adorable, tiny young Yorkie with a bow in her hair doing all sorts of tricks. I saw it posted on a list of thousands of people, and not one person spoke up to discuss the stress signals the dog seemed to be throwing. (Not to mention that some of the tricks might have been physically too demanding for a pup.) Perhaps people were just being polite. I didn’t say anything myself because I had dealt with enough controversy that week, sigh. But the dog did not appear delighted with the training interaction at all.

I’m not linking to the video here, but will send a link privately to any curious folk who make a request through email (sidebar) or a comment.

It sure confirms my doubts about the advisability of just having everybody depend on “watching the dog.”

The following two stories are true. They both happened to me. One tells how my observation of dog body language led me to analyze and classify the reason for my dog’s stress. After the classification I could be alert to other similarly stressful situations. The other example tells how being informed of what quadrant/process I was using made me question a decision I had made, gain more empathy for my dog, and change my behavior. My (beginner) knowledge of learning processes helped in both cases.

Example #1: From Body Language To Learning and Generalization

My puppy Clara has always loved doing stuff with me and has great attention and a great work ethic. However, I have noticed that shaping can be quite stressful for her. I even wrote a post about shaping and stress. I started thinking about why it might be so. I realized that with my imperfect skills, the changing of criteria was hard on her. Riding the little extinction trails where one version of something ceases to be marked and reinforced and another behavior is desired was quite hard for her.

In the photos, Clara is doing a fast counterclockwise circle, which is a default stress behavior for her. Ironically, the behavior we were working on was, “Relax.” (We’re doing a lot better with that now.)

Clara circling during a shaping session (1) 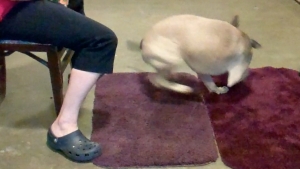 Clara circling during a shaping session (2)

I have since learned more about shaping and know that if it’s done with careful manipulation of the environment like Skinner suggested and the great trainers can do, there can be much less of this type of stress. I like to think that my skills have improved. Clara has also grown up a little, and doesn’t think the world will end when she doesn’t get clicked.

But my realization that extinction in shaping was hard on Clara made me both more empathetic to her situation and also proactive in avoiding extinction in other scenarios. Her stressed body language made me analyze the cause of the stress, and being able to put a term to it allowed me to learn more about it and look for similar problems in other situations.

(Extinction is not one of the four operant learning processes that people call the quadrants. Extinction is when a behavior that has been previously reinforced ceases to get reinforcement. It is a process that can happen with both operantly learned and classically conditioned behavior. What’s important for my point is that it is a learning method that is often under my control and that I can choose whether or not to employ, and one that can definitely be stressful.)

Example #2: From Quadrants to Empathy

Early in my life with my dog Zani I picked her up and carried her into a public place. She is very friendly and immediately started to struggle to get me to put her down. Since I was just learning about reinforcement, and had learned that what you reinforce is what you get, I decided to hold onto her until she stopped. I didn’t want to positively reinforce her struggling by giving her immediately what she wanted. She finally stopped, I waited a few seconds, then put her down.

I mentioned this episode to my teacher, who said, ah yes, you used negative reinforcement instead! Up until that moment it had not trickled into my head that I had been using a mild aversive. Zani did not want to be held. She was struggling to get away. I not only hung onto her but I had tightened my grip until she figured out that struggling wouldn’t work. (There could be an element of positive punishment in here as well. But the duration of the tight grip, and the requirement for Zani to come up with a different behavior to escape it, even if the behavior was relaxing her body–these indicate that the major process was that of negative reinforcement.)

I grew up spending a lot of time in the country and was around a fair number of small animals and farm animals. Holding or holding down a struggling animal with force was just something you took for granted. You had to do it sometimes “for their own good” and it was something I was absolutely comfortable with.  I was 50 years old before I realized that there are things you can do to help prevent you and your animal from getting into this situation in the first place, and ways you can give them more of a say about things. And it was in part because my teacher reminded me of the different processes of operant learning. This led to empathy for Zani on my part, and for me not only to work on that specific situation but to be more aware of the negative reinforcement moments in the future.

I’d be interested to know what the rest of you think. Can we train humanely without knowing learning theory? For me, the theory definitely helps.

*NOTE “The quadrants” is not optimal nomenclature in learning theory. I use the term throughout this piece because that is how the argument is almost always stated, and people might not know what I was talking about otherwise. Better nomenclature is “the processes of operant learning.” “The quadrants” is just a description of the shape of the diagram they fit in, as Dr. Susan Friedman points out.