Posted on April 7, 2014 by eileenanddogs

A friend recently shared a flyer from Bark Busters, a dog training franchise business. It is called “Barking: The Facts” and can be seen at this link. (This is a special link to avoid raising their incoming click stats and you may see your browser redirected. Don’t worry.)

The flyer made me interested so I set out to investigate the methods of this franchise.

The main pages on the Bark Busters website have wording that appeals to the many people who want to get their dogs to behave without hurting or scaring them, including the following:

Sounds pretty good, so far, except for the fact that they don’t mention exactly how they help you achieve all this. But there are a few more red flags:

Hmm, thanks to the analyses of those who have made a study of how to judge dog trainers by their own descriptions of what they do, we actually have quite a bit to worry about here.

So don’t be surprised at the tools this franchise teaches people to use to help create that lasting emotional bond with their happy lifelong buddy. Airhorns, spray bottles, penny cans, and special bags to throw (not thrown at the dogs to hurt them, just thrown nearby to scare them). They also teach a special growly way to yell at one’s dog. 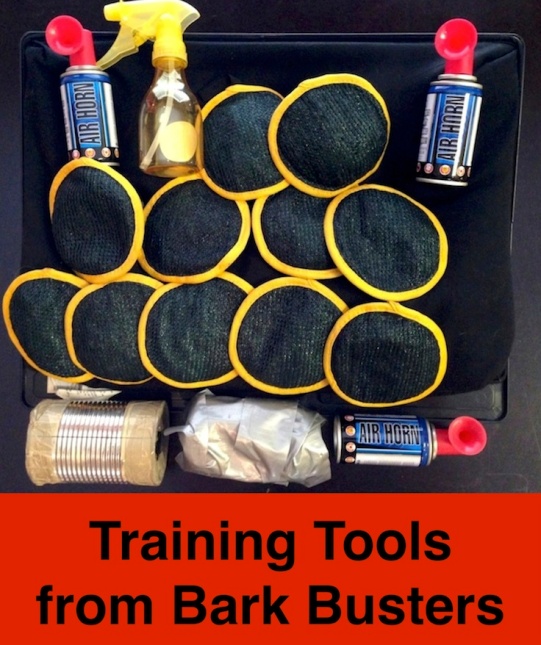 Note: the round things are not disc toys

The items in the photo were all collected by a trainer friend who was called to help families who had previously hired Bark Busters.

The preceding was a little overview of what we can glean about their methods. But what I’m most interested in is the mixture of information and mythology about barking in the flyer.

The flyer starts out all right, saying that barking can be a sign that the dog is stressed. But then it goes on to say, in the very first bullet point, that dogs who bark at “birds, dogs, people, falling leaves, or clouds” are “nuisance barkers.” How very sad for the dogs who are scared of any of those things and are barking out of fear. Especially given the tools above, whose main functions are to startle and scare.

You can be pretty sure that a company that advertises that it uses no treats does not employ desensitization/counter conditioning as a training technique. This is the established and mostly widely accepted treatment for fear in dogs.

There is an interesting subtext to the flyer. It is that dogs should properly be watchdogs; that they can come to distinguish true threats to your family (it doesn’t say how); and that any other barking is not useful to humans and is “nuisance” barking. The use of the word “nuisance” seems to imply one of the tenets held by believers in rank reduction: that when your dog exhibits a problem behavior, he is challenging your authority. (The flyer mentions that it is a real problem if a puppy barks back at you while being “corrected vocally.”) The flyer includes the following:

As they reach maturity, most dogs will naturally protect their owners when needed and where necessary…

So when the problem behaviors have been removed, you get a dog who will be an asset: it will guard your family. It doesn’t explain how the dog, if he has been successfully punished for barking, will magically know that in the stranger danger situation (and only then), barking and protection are suddenly desirable.

The idea that dogs can intuitively recognize truly threatening humans dies hard, even in the force free training community. I have no doubt that there are some dogs who can perceive a real threat from a human. They are way more perceptive than we are in so many ways. And of course, many breeds have been selectively bred for protection.

But I’m sorry, that probably doesn’t go for Susie the noisy sheltie or Boomer the baying beagle. Once I learned how many things the average undersocialized dog is bothered by, I let go of the idea that the average dog can safely make decisions about whom to object to. Undersocialized dogs may be as likely to attack a toddler, a man with a beard and hat, or somebody on crutches as they are someone who is threatening actual violence. It’s scary that anybody is promulgating the idea that dogs as a general rule can make decisions about when aggression might be acceptable.

This is quite amazing, the idea that your dog can learn to be quiet all the time except when a criminal comes to your home.

A trainer friend points out that although Bark Busters mentions demand barking in the list of problems, they fail to point out that that is generally created and certainly maintained by the humans who reinforce it. It’s a problem we usually create, whether we know it or not. But that fact doesn’t fit into the rank reduction model. And the result is especially sad. As long as the humans don’t become aware of the ways that they reinforce barking, the dog will likely receive attention and harsh treatment alternately for the same behavior.

I’m afraid the biggest myth involved with Bark Busters is the idea that the training methods they appear to use are benign ones. Using some very basic premises about learning theory, one can state some of the likely effects of this casual use of aversives.

If you throw things in your dog’s direction, spray them,  and/or make sudden, extremely loud noises (either with an air horn, a penny can, or by growly yelling):

References on fallout from aversives.

Oh and by the way, it’s not just the dog who can get ill effects. If the actions you take successfully interrupt the barking (note that I didn’t say solve it; just get rid of it momentarily):

Our best friends, and all animals, deserve better than this.

Note: I have not hired Bark Busters nor have I been exposed to their training. This post is based on what they say about themselves in their promotional materials, the tools they promote, and deductions (informed by principles of learning theory) about the general, known effects of such tools. I have also read that there are some individual Bark Busters trainers who eschew these methods.

Since some new folks may be arriving at the blog, here are my guidelines for comments.