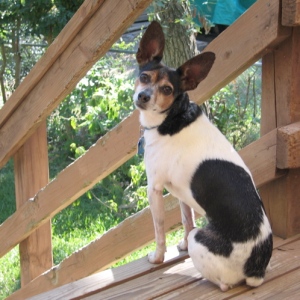 Cricket passed on May 31, 2013, at approximately 17  years old. I got my little heart dog around the age of 6 from Ratbone Rescues. My dear little girl in her last years was deaf, visually impaired, and had Canine Cognitive Disfunction (doggie dementia). She needed a lot of help, but still had a good quality of life.

In 2006 when I got my next oldest dog Summer and first investigated training, I found out that Cricket at the age of about 10 was a fast and eager learner. We played catch-up for a long time and didn’t get as far as my other dogs, but she insisted on being included and was lots of fun to train. She passed the Canine Good Citizen test, of which I was really proud. After that we concentrated on behaviors that would be helpful to both of us as she grew older, as shown in this video, Polite Pet Behaviors and Enrichment for a Senior Dog. 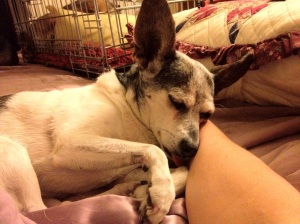 She was an extremely tough little dog, having survived at least three attacks by bigger dogs, two of them while under my care. She had the typical rat terrier quality of being “all business” when outside, but close and affectionate indoors with her person. She preferred  having me in her sight at all times when I was home, and after she didn’t see well, generally kept her nose close to my leg. Also true to her breed, she slept with me under the covers as long as she was robust enough to do so. She was always separated from Summer and Clara, and while she sometimes was in the same area as Zani, was not particularly sociable with her.

RIP Little Cricket. I miss you with all my being. 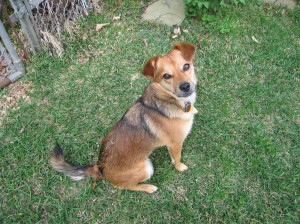 Summer at about 1 year old

Summer will be 8 in November 2013. I got her from a small town shelter one day before she was to be euthanized. Someone who used to go regularly to the shelter and post pictures of the animals on various e-mail lists took a picture of Summer looking very sad, advertised her as a terrier mix, and said “She knows she’s in trouble.” Even though I have passed up many other sad and dire cries for help, as most of us have in the dog world, I was absolutely compelled to go get her. I didn’t even think I could set foot in the shelter but I did. I got her out, she turned one quietly happy circle, and got into the car with me. Summer is an extremely mixed breed, but you can see German Shepherd Dog in her sable coat, and her temperament is like that of some northern breeds (think Chow-Chow). She was about 10 months old and I sought out training help almost immediately. I was unprepared for her boisterousness, tiffs with my older, smaller dog Cricket, and all the chewing. She showed the typical signs of undersocialization: fear of men, children, any person who was a little different, novel objects.

Summer grown up is slightly hypothyroid and on medication. She remains reserved, and needs a big space bubble around her. She has a couple of dear friends besides me but the rest of the human race is pretty uninteresting to her. She is reactive, hypervigilant, a bit sound sensitive, and has had one episode of dog aggression and a few close calls. I suspect she doesn’t feel well a lot of the time. I think it is hard to “be” Summer, but she works so hard to be good. Despite these difficulties she has become a wonderful dog to work with and we have earned titles in obedience, agility, and rally. Her official name is UCD Summer RA NA NAJ TBAD TG2. 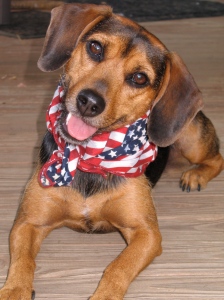 Zani at about 3 years old

Then I got an extroverted dog. In July 2009 I was driving home from my agility class and there was an adorable little hound puppy running down the street. I got out and called to her and she jumped in the car with me. No collar of course. I took her home with me. The next day the vet said she was actually a year old. (She still passes for a puppy to this day.)

I put up signs and a couple of days later her owner called (from his address he had probably been passing my signs for a while). He said he was facing foreclosure, he and his daughter were gone most of the time, and Zani spent up to 12 hours a day in a crate or outside in a fence that she could escape through. Her survival prognosis wasn’t good, and I grabbed at the chance to keep her. Zani has a spectacular temperament and loves all people and particularly young children. She is sociable with other dogs. She has a keen mind and some fire to her as well. She keeps total track of all reinforcement opportunities around the house, and if there are treats or fun to be had, she is there.

She is marked like a miniature black and tan coonhound and has a slightly wiry coat. I speculate that she is beagle/dachshund/Jack Russell. She has a sensitive side and gets her feelings hurt from time to time, but on the other hand she is the only one of my dogs to ever sass me back. Zani is a natural agility dog, with “power steering” as my teacher says. She also seems to shine in a competitive environment, a bonus gift from the agility gods. I am immensely proud that at her first agility trial ever she had three fast, joyful qualifying first place runs. Would have been a title except it was all under one judge. In November 2012 she got her novice jumpers title in AKC and one leg in open jumpers! This little girl has been to two agility trials in her life and has 8 blue ribbons to show for it.) 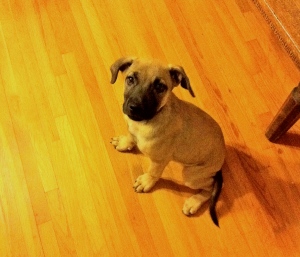 Clara on the day she arrived (about 10 weeks old)

In the summer of 2011, several of us in my neighborhood were aware of a homeless dog who had a litter and was raising them in a small patch of woods. Some people set out food and water for her, but she was apparently pretty wild. In August, one day I was driving down the street and saw a pack of four puppies moving fast. I slowed down and spoke to them and they ran. I thought to myself hastily that there was no way I could help them (they were not even very close to my house), and I admit to a slight sense of relief. I was already running over with three dogs.

About 10 days later, Zani started barking like crazy in the back yard. One of the puppies was by itself down in the side yard between my house and my neighbor’s. I approached her and she hunkered down and growled. I went inside and got baby food. She was in front of my house when I came back out. She carefully evaded me. I put the baby food down and backed off, but she would have nothing to do with it and growled again when I approached her. I turned on my video camera to show my friend that I could not possibly catch the wild puppy. At that moment, Cricket, from inside the house, started barking. The puppy crept up my front walk towards the barking, past me and in the door when I opened it.

That is how Clara came into my life. She made friends with my dogs and accepted me within the evening. But I found out the next day that her admitting me into her circle didn’t apply to any other humans, with whom she continued to act like a wild animal. My journey with Clara is one of the reasons I started this blog. She is bold, preternaturally smart, and both the most enthusiastic and consistently joyful dog I’ve ever had. She was 10 weeks old when she arrived. Here is her “introduction” video. The video includes footage of her the moment she crept into my house as a wild puppy. In mid 2013 now she is 2 years old.

I hope you can share my enjoyment of these wonderful dogs.

19 Responses to About the Dogs