Posted on November 21, 2013 by eileenanddogs 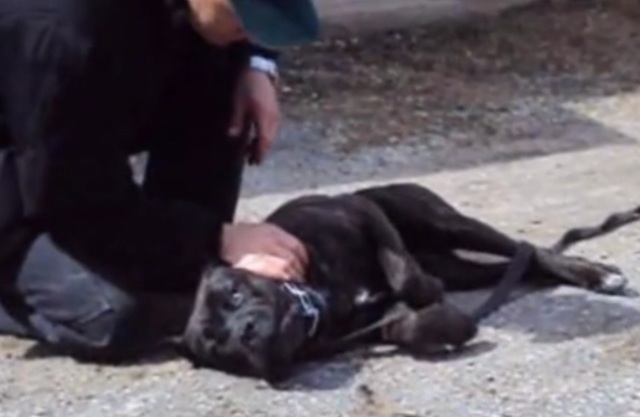 This is Part 2 of a two-part series.

In Shut Down Dogs, Part 1 I talked about the fact that people appear to believe and say that a shut down dog is relaxed or calm since it is motionless. In that post I included a video of my own dog Zani after she had been scared by an air snap from my rat terrier.

In this post I am putting my money where my mouth is. I have put together a compilation of clips from many published movies in which dogs are either motionless or moving in very guarded, unnatural ways. In most of the examples of motionless dogs in the movie, the narrator says that they are “relaxed.” They are far from it, and it takes no advanced knowledge of dog body language to tell.

In the clips of dogs demonstrating very guarded, unnatural motion, no one is saying that they are “relaxed,” but in all cases they are from videos that are supposedly showcasing successful training. Their behavior is obviously thought to be desirable. The dogs just happen to be scared and intimidated out of their minds.

Most of us learned in elementary school that animals both in the wild and domesticated may become motionless and freeze to hide and protect themselves. People, too! We have seen the careful movements of animals who are scared. So we actually should know better than to confuse stillness with relaxation across the board. But our cultural mythology about dogs–which I must say I have not been immune to–trumps that. It is like the Emperor’s New Clothes. So many things we take for granted about dogs are obviously wrong once we learn to actually perceive the dog in front of us. And when we learn just a little bit of science, we can start to see through even more misconceptions.

The video is pretty unpleasant, but I hope it communicates. Please feel free to distribute far and wide if you think it is helpful.

Link to “Shut Down Dogs” video for email subscribers.

A special note about the dogs that are shown in motion. At least two of the three clips show shock trained dogs, and I suspect the third does too.

Although some breeds deal with it better, including those who are bred specifically to stand up to high use of aversives in training, there is often a certain look to dogs who have been trained with shock.

These dogs move with extremely inhibited movement, as if they are afraid of getting one toe out of place. They do not wag their tails (they usually tuck them). They hunch their bodies and keep their heads down. They are apathetic and guarded. But their movements can be quite jerky, as you will see in the video of the German Shepherds. When cued to get up from lying down they move as if shot out of a cannon, then pack themselves around their trainer and slow back down. (It’s pretty easy to guess how that was trained.)

Also, and this has been remarked upon by others, in two of the clips when the dogs lie down on cue, they do so in slow motion, very carefully, as if every muscle and joint is hurt by the movement. You can see this in the clip with the German Shepherd Dogs and the last clip with the white dog.

I did not put clips of these dogs into the video, because in these cases the humans involved correctly and sympathetically identified that the dogs were extremely stressed. I am including the pictures here as more good examples of shut down dogs. They are all traumatized by the shelter environment and probably experiences from before they entered the shelter. (All three of these dogs are said to have recovered and were adopted.)

Each dog is avoiding eye contact and has a body posture which is avoidant and drawn in on itself. The papillon and lab both have visibly roached backs and tails tucked close to their bodies. All three dogs were unresponsive or avoidant of  human touch in the videos. 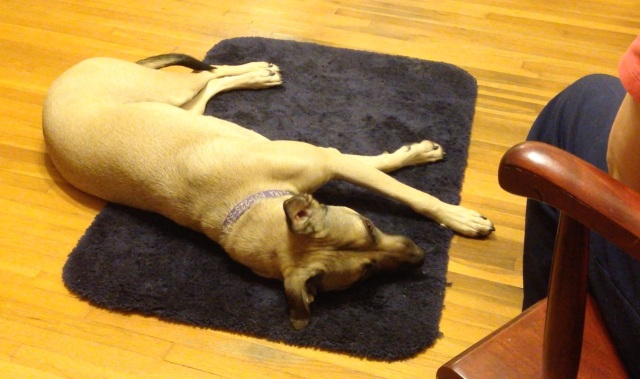 Sometimes I find it hard to believe I actually taught my dog to do this!

So if watching the “Shut Down Dogs” video is like taking some bad-tasting medicine, don’t worry, you get a treat afterwards!

I have also compiled a video of dogs in various stages of relaxation, and most importantly, who are being taught to relax using positive reinforcement and classical conditioning.

We’ve got a variety of techniques going on. With Clara I used marking for stillness (since I had already messed up and marked too quickly for relaxed behaviors and got a dog who flailed around). In the photo above, she is less relaxed than she is in the clip in the movie, but I still claim bragging rights. (You can still see some slight, telltale wrinkles in her forehead.) She can get to that state faster and faster these days, and in more stimulating environments.  With Summer I marked for progressively more relaxed behaviors. It worked well because she is lower energy. I also did Dr. Karen Overall’s Relaxation Protocol with Summer.

Sarah Owings used Nan Arthur’s Relax on a Mat method from Chill Out Fido: How to Calm Your Dog. Marge Rogers used several techniques, and demonstrates the On/Off Switch Game from Leslie McDevitt’s Control Unleashed. Elizabeth Smith demonstrates settle on cue (after exciting activity) from Sue Ailsby’s Training Levels. Tena Parker describes the method that got her an amazingly relaxed dog at a noisy agility trial and many other chaotic environments in the article: Help, My Dog is Wild!

A word about classical conditioning and Dr. Karen Overall’s Protocol for Relaxation. (The link is to an old version of the Protocol that is somewhat out of date but it gives the idea. The newest version can be found in her new book.) Rather than specifically reinforcing relaxed behaviors, the Relaxation Protocol only asks of the dog that she perform a down, and the trainer does progressively more active and potentially arousing things in prescribed orders. Walking around, trotting, clapping hands, backing up, going through a door, ringing a doorbell, saying hello to someone (imaginary), etc. After each action, the dog gets a treat. What it teaches the dog is that when she is on her mat, whatever happens out in the world doesn’t matter. She doesn’t have to respond to it. She can zone out and not worry. After the dog “gets” the basics of the protocol, you can start working in many other events and actions to let the dog know that they are also “no big deal.”

I’m pointing this out because you can see something interesting in the video. In the short clip I clap my hands, give Summer a treat, then jog in place, then give her a treat. She flops down on the mat after each treat, but the interesting thing is that each time I finish my activity, her ears pop up, anticipating her treat. She knows from oodles of repetitions that the treats depend on my actions, not hers. That’s the result of classical conditioning. Each weird action on my part predicts something good.

Summer is moderately relaxed on the front porch

I have also reinforced relaxed behaviors with Summer. I’m sharing the photo on the left to show a step towards relaxation in a more stimulating environment than our front room. She is not as relaxed as she can get, however, given that she is on the front porch with a view of the street, a very exciting place for her, her level of calmness is coming along nicely.

If you want to see even more stills of relaxed dogs, check out the cute ridgebacks in Shut Down Dogs, Part 1.

Link to the “Relaxed Dogs” video for email subscribers.

I will be accused of cherry picking videos with particularly miserable dogs. That’s not what I was looking for. There are plenty of those, let me tell you. The point of this post is to show that a certain segment of the population finds the behavior of shut down and forcibly restrained dogs desirable (and makes up stories about them being relaxed). That was my criterion: videos demonstrating that people have illusions about certain behavior (or lack of behavior) from dogs.

Videos of intimidated, apathetic, or frozen dogs are dead easy to find. People post them on YouTube to show off their training skills, to “educate,” or in some cases, to let their friends laugh at their dogs.

I think they perfectly demonstrate what Dr. Jennifer Cattet describes in her thoughtful piece “When is Controlling Our Dog Too Controlling?” A demonstration of the desire to control, not such a great thing to start with, gone completely amok. When the dogs are controlled down to the level where there is no spark of life left in them.

In contrast, what you see in the section on teaching dogs to relax are dog owners who are training a behavior for the benefit of their dogs. Sure, it helps the owners, too, but it directly makes for a dog who is more comfortable in this world of ours. I believe it is a big hearted thing to do.

I hope this comparison of shut down intimidated dogs and relaxed dogs was helpful. Anyone want to share more relaxation techniques?