Posted on November 9, 2012 by eileenanddogs

One of the great dogs of the world left us all too soon on November 2, 2012. I never met him in real life, but feel like I knew him well through my dear friend and his person, Marge Rogers.

Marge got Pride as a petrified 5-month old puppy from Ridgeback Rescue. He and his littermate had been dumped by the side of the road. That’s him in a shelter in Orlando on the left. He had been staying plastered to the back of his kennel. 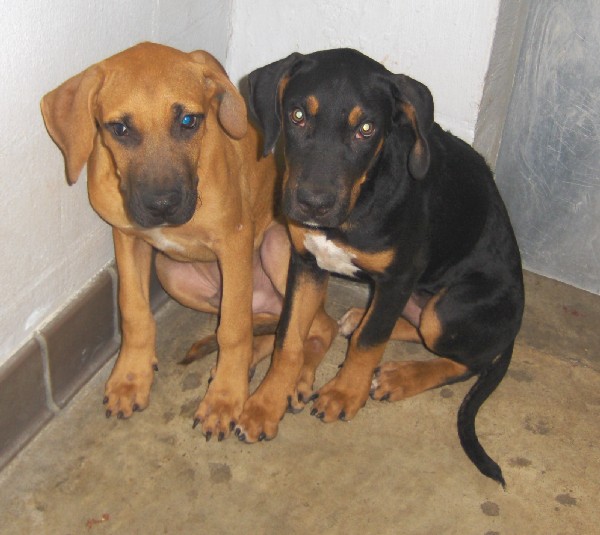 Pride (on left) in Rescue

When she first met him, she couldn’t even touch him. He was the more shy of the two abandoned pups. His littermate (who got adopted the same day) came forward and did all the talking.

Marge had to ask Pride if his coat was soft. (It was.)

In the loving home of Marge and Bob and their older ridgeback Rounder, Pride blossomed into a quirky quickwitted boy with a sense of humor. Here he is exploring the yard blower.

He turned out to be wicked bright, and thrived on Marge’s gentle touch and training skills.

Using a Target for Various Behaviors, including a Tuck Sit

And learning tricks in the tradition of all her ridgebacks, historically considered to be an “untrainable” breed. (Of course the following “tricks” have extremely useful applications. I wonder if there was ever another ridgeback with such delicate, soft mouth skills?)

Retrieving Eyeglasses (by the arm!)

When Marge decided to make a video of all the steps of the Ian Dunbar Sit Challenge, 18 month old Pride showed well with the “big dogs” who already had multiple titles.

And when she set herself a challenge of teaching one of her dogs to do a hind leg lift, Pride again rose (ahem) to the challenge.

This is one of my favorite dog pictures of all time. How she lucked into and captured the wicked look on his face I will never know. He was a GOOD boy, not a naughty one! Marge made a very clever Christmas card that was used as a fundraiser for Ridgeback Rescue.  Her various cards have raised over $2500 for rescue.

When Pride developed reactivity, Marge turned her efforts into getting the most expert help available and consulted with Leslie McDevitt and Dr. Karen Overall. She changed her training focus to helping Pride relax in his own skin and develop confidence.

Marge’s training videos have helped so many dogs and their people all over the world. But the following video of Pride’s demonstration of Dr. Overall’s technique of a dog learning to take a breath is a true classic. I remember clearly how excited Marge was when Pride learned to do it on his own to calm himself.

Teaching Pride to Take a Breath

Marge had him only three short years, but the joy that each brought the other had no end.

Pride at the Beach

The Comments section is open as always, and you can also write a personal message to Marge in the sidebar and I will forward it to her. I hope those of you who knew him in person will tell some stories below.

For some of Marge’s favorite photos of Pride, click here. You can also see more videos of Pride, Rounder, and Chase at Marge’s YouTube channel.